The global golf equipment industry is valued at over $6 billion. Needless to say, it is a massive industry and as a result it is flooded with all different kinds of golf clubs. The majority of seasoned golfers have a favorite brand that they stick to, they know what type of irons and or clubs they prefer, for the beginner or occasional golfer however this picture looks very different.

Not to worry, below we are going to take a closer look at the different types of irons that you can purchase and by the end of this article you will have a much better understanding of golf irons in general.

When you buy golf clubs it is definitely not a “one size fits all” situation, what works for your buddy might work for you but in reality, it probably won’t. Different iron types are more suitable for certain players depending on their skill level and natural ability.

For example, I am a pretty good golfer and I prefer the look, feel and workability of a forged cavity back iron. Tiger Woods is a ball-striking phenom and his weapons of choice are blade irons that look like butter knives. Alternatively, my dad decided to take up golf at the age of 50 and he prefers the forgiveness and assistance that super game improvement irons offer.

Super game improvement irons, the name says it all, these irons are designed to “improve” your game as much as possible. Don’t get me wrong, a set of game improvement irons aren’t going to miraculously fix your golf game, but it will give you the best chance of hitting decent shots that have some height, distance, and accuracy.

Super game improvement irons have many benefits. These irons/combo sets with their oversized heads are designed to get the ball airborne with minimal effort. This is vital considering the fact that the majority of beginner golfers struggle to do just that.

Super game improvement irons and hybrids are also very forgiving, as a beginner or occasional golfer, this is definitely something that will make your life out on the course much more enjoyable. An off-center strike (believe it or not but you will have plenty of these when you first take up the game) will still get decent distance and height with a super game improvement club, with players irons the result will be very different.

Walk around on any driving range and you will be able to spot a beginner from a mile away. I’ve seen this time and time again, beginner golfers hit divots, and not just any divots they hit massive divots. Super game improvement irons and hybrids interact with the turf in an optimal manner, this is ideal for beginners to ensure that their golf ball still finishes somewhere near the target even when they mis-hit it.

The design of game improvement irons and hybrids promote distance in a variety of different ways, one of these ways is by reducing spin. Less spin on the golf ball does equal more distance but it also means less stopping power on the greens.

Ladies and senior players tend to have below-average swing speeds, as a result, they struggle to get distance and height on their shots. Math isn’t my strong point but it is pretty easy to see that super game improvement clubs will add up to the missing link that female and senior players are looking for.

Game improvement irons are very agile. It might come as a surprise to you but these irons can be found in the bags of many low handicap amateur and professional players. Pros and good ball strikers are definitely able to hit great shots with a blade long iron. But the margin for error is very small and that’s just one reason why these easy to hit oversized irons are used far and wide by players of all skill levels.

You can also find irons that have characteristics of both game improvement and player’s irons. These often have a nice balance between forgiveness and control and are often the best irons for mid handicappers to start learning to work the ball a little and get more control over their game.

An off-center strike with a players iron will leave you woefully short of your target, this isn’t the case with a game improvement iron. Struggling to get height on your approach shots? Game improvement irons are designed to launch your golf ball into the air with ease which ensures maximum distance and stopping power on the greens.

In general game improvement irons are great but if you want to shape your shots they can be a bit of a drawback. Game improvement iron design promote added distance by reducing spin rates, spin is required in order to either draw or fade the ball if workability is important to you then players irons are without a doubt the way to go instead.

Some beginners are better than others, if you are one of the lucky few that has a natural swing with good hand-eye coordination then it might be better for you to get started with players irons right from the get-go. On the flip side, you might need all the help that you can get, if that’s the case then it will definitely be best to start out with super game improvement irons.

Game improvement irons are ideal for golfers that want the best of both worlds in terms of look, feel and performance.

Players irons are forged irons that can be broken down into two categories namely blades (muscle back irons) and forged cavity back irons. Players irons feature a sleek look with a slim top line and sole.

Don’t get fooled by their name, players irons aren’t just for “players” or professionals, any golfer including beginners can play with this style of irons. Just because you can play with a player’s iron however doesn’t mean that you should though.

Players irons are forged out of high-quality steel, the use of softer steel in the manufacturing of a players iron clubhead ensures exceptional feel at impact, I don’t know about you but there is nothing better than hitting a forged iron out of the middle of the clubface.

Forged players irons are designed to shape the golf ball, if you have the ability to draw and fade the golf ball on demand then you will definitely be better off with a player’s iron.

Looking down at a player’s iron can be very intimidating especially if you are a beginner. I speak from experience on this, looking down at a blade 5 iron when you are faced with a tough shot in a tournament isn’t for the faint at heart. I would much rather have a hybrid/game improvement iron in hand in those high stakes situations.

Players irons are very forgiving thanks to their forged designs, they aren’t forgiving however when you miss the middle of the clubface. Off-center strikes with a players iron won’t be very consistent both in terms of accuracy and distance.

Players irons are great for the advanced golfer, unfortunately, they also carry a “great” price tag.

The name says it all, players irons are for players. When I say players I am referring to players that play regularly and that possess above-average ball-striking abilities.

How They Are Made?

A cast iron head is made by pouring hot metal into a cast/mold. The mold is responsible for giving the iron it’s unique shape and characteristics.  In comparison forged irons are carved out of a solid piece of metal.

Cast irons are harder/more solid than forged irons, adjusting the lie and loft angles with a lie and loft machine aren’t recommended. In comparison forged irons are softer and can be bent/adjusted with ease, professional players are always tinkering with different angles and the ability to adjust their irons on the road is a must.

In terms of price forged irons are also more expensive given their design process, yet another reason why it’s best to start out with a game-improvement set of irons at first.

When it’s all said and done though how its made isn’t that important, what matters most is that the irons and their composition in terms of shaft etc. is best suited to you and your golf game/abilities.

By now your understanding of the different types of irons available on the market should be a lot better. If you are going to purchase a set of new clubs  I would advise that you seek the assistance of a professional club fitter at your local golf course or pro shop. 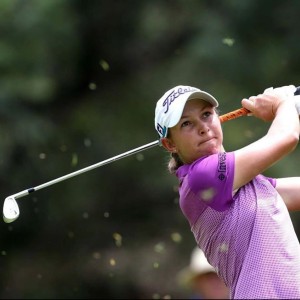 Bertine is a former LPGA Tour player from South Africa. She started playing golf at the age of 9 and, after a very successful junior career, joined the University of Texas at Austin women’s golf team in 2011 where she was named Big 12 player of the year before going pro. Bertine now works as a marketing strategist for a sports and entertainment agency. You can find her online on her instagram.
PrevPrevious PostPlaying Golf In Winter Conditions (How To Beat The Cold)
Next PostGreen In Regulation (…why it’s so important to track)Next