What Loft Should I Have On My Driver?

The average golfer swings between 75-100 mph. At this speed, you are best served with a driver between 10-12 degrees.

Plenty of factors will go into picking the best driver loft for your game. Bottom line, there is no one-size-fits-all answer.

In order to maximize distance, you’ll need to perfect a combination of launch angle, angle of attack, smash factor (club speed + ball speed) and spin rate. Like I hinted at before—there is no easy or direct answer.

Not every golfer at your local muni can swing their driver at 120 mph+ like the guys we watch on tv each weekend. I’d bet money that anyone plays with guys that swing as hard as players on the PGA tour. I’d bet even more money that the guys swinging that hard can’t come close to matching the control of pro golfers.

In order to make up for our “average” human abilities, we need to find the perfect combination of loft, launch angle and angle of attack to maximize our distance.

Based on a variety of studies, we believe that 9 degrees is the best loft for producing distance. To hit max distance with this loft, your swing speed should be at least 100 mph; only a few miles per hour above average.

To complete your ideal conditions for launch, an amateur golfers angle of attack needs to be around 0. On the PGA tour, it is common to see negative angles of attack. If you were to try replicating, it is unlikely that you would be able to launch the ball high enough to maximize distance.

Be careful not to hit too far “up” on the ball as an angle of attack greater than a few degrees will make you hit the ball too high. This also means adding too much spin, which costs yourself distance in the process.

Is A 12 Degree Driver Too Much Loft?

For many casual golfers, no, a 12 degree driver is not too much loft. In reality, breaking from traditional 9.5 and 10.5 degree drivers could go a long way in improving your distance off the tee.

For golfers who swing 90 mph or less, using a 12 degree driver is a great way to gain distance without swinging harder. With a higher lofted driver, you will improve your launch angle and spin rate. As a result, an improvement in distance will also follow.

Why You Should Rethink Your Driver Loft

Plain and simple, you should rethink your driver loft on the simple fact that we have more tools at our disposal than ever before. Besides launch monitors and AI engineered clubface’s, we know so much more about what goes into producing distance and accuracy than we used to.

Do you think Old Tom Morris had any idea about smash factor and moment of inertia when he was making wooden clubs and golf balls stuffed with feathers? Not a chance. Side note: if you’re into reading about old golf, Tommy’s Honor should be on your bookshelf. I understand that was a long time ago, but more recently we’ve seen Jack Nicklaus yelling at the clouds after watching how far golfers can hit the ball now.

Jack Nicklaus is not wrong one bit. Golfers today mash the ball. With modern equipment, they would dominate the best players and courses from generations past. While I might not agree that we need restrictions on equipment, like the MLB does allowing only wooden bats, it shows that we have the tools at our disposal to transform the way we play golf.

The PGA tour will be the first ones to tell you about the place of STEM in golf and how it can be used to the advantage of golfers old and young. What all this science talk means is that we must leave behind our long-held beliefs about the way we’re supposed to do things on the golf course and fully embrace the new technology (that’s constantly improving) available.

What Loft Driver Should A High Handicap Use?

There is no straightforward answer to this question, so we’re going to answer it based on the following assumptions:

For a high handicap golfer, we like a 12 degree driver. We base this answer heavily on how integral loft is to the launch angle equation, and how far we’ve come with the ideology that carry is better than roll, especially off the tee.

You’re looking for high launch and low spin. In decades past, drivers with lofts as low as 7 and 8 degrees were pushed on high handicap golfers. We’ve graduated from this antiquated mindset and base our loft choice on science. Any way you look at it, higher loft does not mean less distance.

If a 12 degree driver still isn’t producing the results that you are looking for (or were promised), there is no problem with continuing to increase loft until you are happy with your distance. We’ll draw the line around 15 degrees, but don’t let traditional ideas of loft get in the way of choosing something that is beneficial to your game.

What Is Spin Loft and Why Is It Important?

Without getting complicated, spin loft is the difference between the loft of your club and angle of attack. We hear about “spin” all the time, but hardly ever consider what causes it, how we can affect it and how we can use it to our advantage. Now you might consider it, but probably not enough.

The most “foreign” concept in this equation for many golfers could be angle of attack. You hear golfers at the amateur and professional level constantly talking about hitting up or down on the ball, but this goes deeper. By altering your angle of attack by even a degree or two down, you can use a higher lofted driver to produce better ball flight and greater distance.

For an ideal swing and to maximize distance, you want to keep spin loft low. An easy way to identify if your spin loft has gotten too high, especially off the tee, is if you are getting actual backspin when it lands. Now, in order to achieve the maximum distance for your swing, you want to find the right angle of attack that produces mostly air flight, with some, but only a small amount of roll.

The only time a negative angle of attack works is with a higher lofted driver where the two average out for an optimal spin loft. For most amateur golfers, it will be a struggle to keep spin loft low, but doing so will help increase distance and control. If you have access to a launch monitor, you’ll be able to track these minuscule tweaks in your swing. If not, it largely becomes a guessing game based on trial and error.

What Type of Players Would Benefit from A Higher Lofted Driver?

We’ll start with the obvious answer, you hit the ball too low. Increase your loft, elevate your ball flight—pretty simple. The longer a ball is in the air, the more yards it travels—that’s my kind of science.

An under the radar identifier that you could use more loft on your driver is how much your shots are curving. While a big, sweeping hook that rolls for 30 yards might be appealing, anyone who plays this shot shape will tell you how difficult it is to control. The same goes for large cuts and slices.

Nothing is wrong with a nice straight shot. You know what you’re going to get, and with a straight shot, you can’t be upset. Curving of the ball is caused when the face angle and club path are moving in opposite directions. In this scenario, you lack spin loft and instead have counterproductive spin off the club. By adding more loft, you aren’t solving your problems entirely, but you will have more control and better launch angles.

What Type of Players Would Benefit from A Lower Lofted Driver?

Again, keeping it simple. Players that hit the ball too high (moonshots) would benefit from a lower lofted driver. There comes a point with launch angle and ball speed where you will need to hit it lower in order to maximize distance.

Just like throwing a ball (not the one you tossed into the woods after a double bogey last round), you need to find the arc that provides the most distance. If you’re hitting the ball too high, not only will spin rate become so great that it will actually come backwards when it lands, you’ll be leaving valuable yards on the table (tee).

If you tend to hit up on your driver, perhaps even too much, lowering the loft would help to adjust your launch angle and spin rate to a more desirable spot. An example of this is the more recent trend of some players on the LPGA tour using drivers with lower lofts than players on the PGA tour. 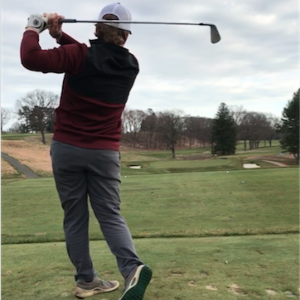 Mike is a weekend golfer from Connecticut and a student of the game. Any day he keeps it under 80 is a good day. When he's not writing about golf or playing, he works in higher education fundraising.
PrevPrevious PostPrecision Pro NX7 Pro Rangefinder Review
Next PostBest Fairway Woods for SeniorsNext