What’s In The Bag – Jordan Spieth

Jordan Spieth is coming off his fifth top-three finish at the Masters Tournament. He is ranked 29th in the world, and so far in his career, he has collected a Masters win, U.S. Open win, and an Open Championship win.

Have you ever wondered what’s in the bag of the 27-year-old superstar? Here are the clubs and golf necessities that Jordan Spieth uses on the tour.

Titleist sponsors Jordan Spieth, so it’s no surprise that you will find the TSi3 driver in his 2021 golf bag. Non-contracted players on the tour have used this club, showing its power and reliability.

The toe of the TSi3 is more rounded than other drivers on the market. The round shape and alignment mark helps pros like Spieth hit the ball exactly where they desire. The head also helps with swing speed, which helps lengthen Spieth’s distance off of the tee.

This club has helped Spieth consistently find fairways with a lot of power in 2021. He is averaging just under 300 yards from the box this season with the TSi3 and hitting fairways 52.3% of the time.

Speed and stability definer Spieth’s fairway wood. The Titleist TS2 has an optimized weight distribution that many golfers on the tour have enjoyed, including Spieth. The weight has been reduced in the club thanks to the refined face, which allowed Titleist to extract six grams.

The TS2 is not the most forgiving club, and it has hurt Spieth when he does not have a centered hit. However, the 29th ranked golfer in the world does not make many mistakes. The Titleist TS2 has helped him score 4.42 birdies per round which ranks him 15th in the world.

Spieth relies on his hybrid to replace the long irons in his bag. The technology in the Titleist 818H2 combines the best of the old with innovations to improve distance and accuracy.

There is a feature in the club called Active Recoil Channel 2.0. This technology puts a flexible polymer insert behind the face of the club to improve contact and increase distance. The Titleist 818H2 gives Spieth the best of contact, forgiveness, distance, and launch angle.

Spieth uses the Titleist T100 irons, and he does not go any lower than a four. This shows how much he relies on his 818H2 hybrid for shots where some tour players would elect to use a low iron.

Titleist has three T-Series irons in the collection. The T100 is the least forgiving of the clubs, but it has the most upside for clean strikes. The heads on the T100 resemble blades, which allow Spieth to generate power with his club speed.

The T100 is the next generation of the Titleist AP2, which has been the most played irons on the PGA Tour for the past decade. Spieth switched to the T100 in 2020 after using the Titleist 718 T-MB in 2019.

The sole of the T100 is slightly pre-worn to improve the glide of the head on the grass. This gives Spieth the best of both worlds for steep and shallow strikes.

The T100 irons have the smallest amount of offset of any set that is used on the tour. This does not help forgive bad shots, but it keeps the ball straight with clean contact. The offset on the T100 irons helps Spieth’s ball stay straight instead of hook or pull.

The majority of the weight in the head is at the face of the golf club. Forgiveness is not paramount, but this innovation helps relieve some of the issues caused by a technical mistake in Spieth’s swing.

Spieth’s Project X shafts on his irons are what most tour players choose to utilize. The shaft helps create a low launch profile and improve impact quality on the ball.

Spieth is a short game master, which has helped him become one of the world’s best players. For his wedge shots, he uses the Titleist Vokey SM8 wedges.

He has four wedges in his ba,g including a 46, 52, and 58, and 60 degree. These irons provide excellent stability for Spieth when he is trying to stick the green.

The ball stays on the face for a longer time which helps the three-time Major Champion maintain control on the course. You will not hear a click impact when Spieth swings his wedges.

Spieth is also a great player out of greenside bunkers with the Titleist Vokey SM8 wedges. He is 18th on tour in sand saves, averaging just under 60% out of the bunker after a mistake.

Amateur golfers who use the Vokey set have also given rave reviews for their ability to hit great shots out of bunkers. The golfer’s wedges are a big reason that he can hit so many birdies in high-pressure situations.

The Scotty Cameron Circle T 009 putter is a world-renowned club. Circle T means that a putter is for the “tour only.” If an amateur wants to get their hands on a Circle T putter, they will have to pay thousands of dollars.

The Titleist Pro V1x is regarded as the best golf ball on the market, so it’s no surprise that it’s the ball of choice for Jordan Spieth. The ball performs well in the short and long game, which is why Spieth does not have many weaknesses before he hits the green.

These balls are costly for an amateur, but they help golfers hit better shots. The Pro V1x gives exceptional distance with consistent accuracy. If you watch Spieth play, you will be able to tell this with his steadily brilliant shots.

When Spieth designed his latest shoe model with his sponsor, Under Armour, he wanted traction on the course. There is not a better shoe in terms of grip than the UA Spieth 4 GTX.

Grip is power in golf, and these shoes have helped Spieth collect almost $3.7 million in winnings this season. The shoes combine a spiked and spikeless design for superior command in all conditions.

The UA Spieth 4 has been on the golfer’s feet since 2020. Under Armour is Spieth’s apparel partner, so you will always see him on the course rocking UA gear.

Spieth relies on Titleist and Under Armour equipment in his golf bag. This combination has proven to be efficient for the three-time major champion. 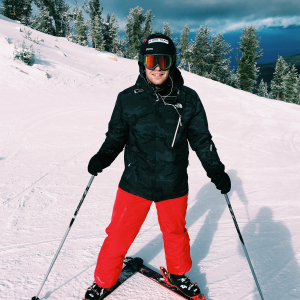 Tanner is avid writer, blogger, and podcaster from Connecticut. Anytime he isn’t covering sports or writing about health and wellness, you’ll catch him out on the golf course doing his best to break 90.
PrevPrevious PostBest Low Compression Golf Balls For Seniors