Professional tour players have the luxury of using top-notch launch monitors like the Trackman. While we all wish we could own a $20,000 launch monitor, unfortunately, many of us can’t afford that price point. Instead, we look towards the mid-range market and the Flightscope Mevo fits that breed.

In fact, it made our list of the best launch monitors.

The Flightscope Mevo boasts a very full feature set and accuracy that is comparable to other monitors that are much more expensive. It’s hard to find them in stock at the moment, but we found a reliable retailer that carries them. Click below to check it out…

For most golfers, the included features of the Mevo are plenty to suffice their needs.

However, there are some features that the Mevo does not have. Those include metrics such as path, face-to-path, angle of attack, offline measurement, and descent angle.

But, make sure to keep your expectations in line though because the Mevo is only $500 after all. You would have to spend at least 4x that price to get more measurements. So this launch monitor is best for the amateur golfer that wants more feedback from their range sessions and the ability to know distances when hitting into a net at home, but isn’t ready to invest in the more pro level launch monitors.

There is a newer version of the Mevo, called the Mevo+ that does indeed remedy the missing measures, however, the increase in price takes you near $2,000.

So the Flightscope Mevo is a very competitive launch monitor competitor in the $500 and under category.

When originally released, it was designed as an entry-level launch monitor for those new to the market. Similar to the Rapsodo MLM, the Mevo also records session data and records videos of each swing you take for review.

What does the Mevo Measure?

With the Mevo the setup is extremely easy. Connection via Bluetooth is seamless.

The Doppler radar creates a window area for the ball to ideally be in so that the Mevo can track it more accurately. Good thing is that the app used to control the Mevo makes changing these settings extremely easy.

Ball speed for every club was off by 3.5% or less. In fact, ball speed on the driver showed an average differential of about 1.8% per strike. The club speed differences reported to be very minimal and not a concern.

Indoor tests did show that Mevo inflated spin rates. Outdoor tests showed that with more room to pick up data on the ball flight, the spin rates were more accurate. Overall the accuracy was slightly better outdoors but the difference was not nearly significant enough to be concerned about.

The Mevo does tend to have better ball tracking when you attach the metallic stickers to every ball, which can be annoying.

Tests done by single-digit handicap golfers testing both outdoors and indoors on the Mevo in comparison with the Foresight G2, a premium launch monitor, shows that the Mevo tended to show a slightly higher swing speed on average but at times a significantly lower swing speed. So it’s hard to say if you can rely on it 100% swing to swing, but over multiple swings it tends to average out pretty close to the more expensive monitor, especially if you can identify and erase any outliers that see unusually low.

The Mevo also tended to have a higher launch angle as well, only on 2/45 shots did the Mevo report back as equal or lower launch angle than the Foresight G2.

Launch angle discrepancies were reported to be the biggest concern for Mevo, therefore if you are a swing fitter the Mevo may not be the best fit for you. While the silver dots seem meticulous and annoying to better track backspin with the Mevo, it was reported that the backspin was one of the most accurate data points of the Mevo.

The size of the Mevo is incredibly small, it is slightly bigger than an iPhone 6 Plus in thickness, however shorter in both height and length. This makes it easy for transport. With a weight of less than a pound, you can simply put the Mevo in your pocket and take it anywhere.

The Mevo will allow you to set an individual metric on the launch monitor to communicate audibly. This is beneficial if you are working on a certain shot type so that you do not have to keep looking down at the monitor or your phone for the specific metric measurement.

The Mevo app also allows you to record session data from your previous practice sessions.

The app will allow you to record visual video swings as well. The video swings are awesome because all you do is set it up at the angle you want and the Mevo will record from the beginning of your swing to the end of your swing. The app comes with editing tools that allow you to clip or trim the video, in addition to using markup on the video for instructional lines and guidance.

The swing videos that you record on the Mevo app store within the app, allowing you to view your swings anytime you want.

Even cooler, the Mevo syncs with MyFlightScope.com allowing you to store your previous session data in the cloud. The fun doesn’t stop there, you can even export your data from the cloud into spreadsheets for data manipulation if you want to get real nerdy about it.

Check out the video below to see how the app works…

The Mevo has three different shot types available, indoor, outdoor, and chipping. The reason for these settings is to allow the software to focus more on the data of that shot type.

One-piece that may be frustrating to golfers is Mevo supplies metallic dots to put on the golf ball to let the Mevo track backspin easier. Placing dots on a golf ball is not ideal. Certainly you don’t want to be doing this to range balls if you take this to your practice sessions.

The Mevo also uses the distance from the ball setup and altitude of hitting shots to get the data as accurate as possible.

Who Is This Best For

Overall your expectations of performance with the Flightscope Mevo should fall in line with the other launch monitors in the $500 range.

However, the Mevo does have specific features that make it unique from the other launch monitors. Generally, if you can create a solid hit on the golf ball, the Mevo is going to provide you with a great result. Where the weaknesses of the Mevo are exposed are less than ideal strikes such as fat or thin shots.

The Mevo is for the golfer looking to dip their toes into the launch monitor market without having to buy an expensive commercial monitor to start. The data is not always perfectly accurate, but if you can set your expectations at the start with the Mevo, you should enjoy the product and it will certainly help you improve your game. 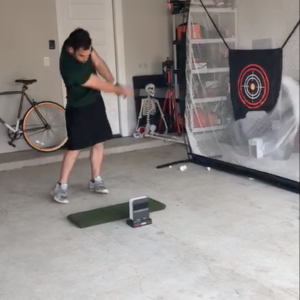 Jack is a golfer that loves to play for skins around Austin, TX. He started golfing as a child and started ramping up his game by taking lessons 3 years ago. Some of his favorite local courses are River Place and Wolfdancer. He now works in digital marketing for a tech company.
PrevPrevious PostDo Pros Use Hybrids?
Next PostTitleist AVX ReviewNext