How To Hit A Hybrid Club Off The Ground

Being comfortable with every club in your bag is an essential part of scoring well on the golf course. For many golfers, trying to hit long irons or woods is difficult and can lead to inconsistency.

If you’re one of these players, learning how to hit a hybrid club off the ground can lead to more fairways and greens in regulation.

Hybrid clubs are built to get the ball higher in the air compared to long irons and are easier to hit than a 3 or 5 wood. Before throwing a hybrid into your golf game, there are a few things we need to go over to help you stripe the ball.

One thing that can be confusing while trying to hit a hybrid is where the ball should be positioned in your stance. As you know, depending on the club, the ball will either move back or forward of center. When hitting a hybrid, the ball needs to be forward in your stance, comparable to where you would position when hitting a 5 or 4 iron.

This allows more time for the face to return square.

To make it easier, position the ball a few inches inside of your lead heal. This isn’t as forward as driver, but close to it. Just like ball position, taking the right swing approach is so important in using hybrids.

Because of the extra muscle in the head, players tend to hit more up on the ball when swinging a hybrid. This is exactly what you don’t want to do. The swing you should make with a 5 iron is the exact swing you want to use when hitting a hybrid. Allow the loft of the head to get the ball in the air and strike down on the golf ball. Although the swing approach is the same, you should see some differences between hitting a hybrid and hitting a long iron.

Keep in mind that there are different types of golf irons and some of them are very similar to hybrids, so these tips can work great for those as well.

Right off the bat, hitting hybrids is going to be so much easier than hitting long irons. The face is larger to promote forgiveness, while the muscle in the back of the head will produce more distance. If struck in the middle of the face, expect a 4 hybrid to travel 10 yards further than a 4 iron. The ball flight of the hybrid will also be different than the one leaving the iron. Hybrids will fly higher and have less spin. This will allow the ball to stop quicker on the green, meaning more putts for birdie!

Like any club in the bag, the first step to making a solid and confident golf swing is set up. This includes ball position, body posture, and dispersion of pressure.

As I said before, position the ball a few inches inside of your lead heal. Having the ball up in your stance will allow more time for the face to return square.

In set up, stand a little taller than you would when swinging a wedge or short iron. Being taller allows you to be more athletic when swinging and lets you attack the ball with more speed.

Before taking the club back, feel like 60% of the pressure is in your lead foot. Your head should still be behind the ball and shoulders need to be square, but having your weight slightly on your front foot will promote you to hit down on the golf ball. Like I said, hitting down on the ball while hitting hybrids is critical to distance and accuracy.

Some Common Questions About Hitting A Hybrid Club

Yes. When you are hitting a hybrid, make the same swing that you would make with a 4 or 5 iron. Hitting down on the golf ball will result in more distance and control compared to if you were trying to help the ball off the ground.

What is the easiest hybrid to hit?

Just like your irons, the hybrid with less loft is going to be harder to hit. So if you have never used a hybrid before but want to start using one, start with a 5 hybrid. It will go a bit further than your 5 iron and will be way easier to hit.

What is easier to hit, a fairway wood or a hybrid?

When it comes to club choice, it’s all about personal preference. Some players find woods easier, some find hybrids easier. In my opinion, off of a fairway or rough lie, a hybrid is much easier to hit and control. The opportunity to hit down on the golf ball with a hybrid can’t be matched with trying to clip a fairway wood off the deck.

Other Shots You Can Make With A Hybrid

Have you ever had problems chunking or thinning chip shots? Too far from the hole to use putter? Something that saved my game a few strokes per round is using a hybrid club around the greens. Choking up on the club and making a putting stroke will take all the risk of bad shots out of the equation. My coach always used to tell me a bad putt is better than a bad chip. Using a hybrid will allow you to use your regular putting stroke from a further distance. If you struggle with getting up and down, try using your hybrid around the greens.

Most golfers will try and hit the driver on every par 4, regardless of the length of the hole. An important part of lower scores is managing the course smarter, and sometimes that means putting the driver back in the bag. Using a hybrid off the tee will help you hit more fairways and avoid trouble.

Now you’re ready to stripe some hybrids! Go out there and lower your scores! Good luck and play well! 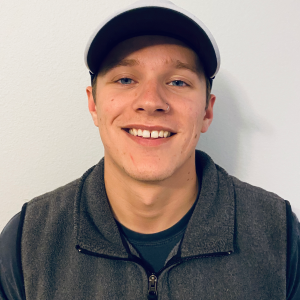 Riley is a Level 1 PGA Professional in New Hampshire. He started playing golf when he was 5 years old and now plays to a 2 handicap and has made teaching golf his career. Riley is also a huge Boston sports fan and hopes to move to Boston in the future. You can find him online on his instagram.
PrevPrevious PostBest Golf Gifts (At Every Budget)
Next PostGolf For Beginners: A Simple Guide To Get Started Playing GolfNext